Since commencing operations in 2001, LiveLife as its name suggests, seeks to create a new age of possibilities for women and men everywhere by empowering them with the gifts of health and beauty safely, effectively and naturally, so that everyone can live and enjoy life to the fullest.

Since commencing operations in 2001, LiveLife as its name suggests, seeks to create a new age of possibilities for women and men everywhere by empowering them with the gifts of health and beauty safely, effectively and naturally, so that everyone can live and enjoy life to the fullest.

We have an insatiable appetite to spread our bit of joy to everyone we meet. A practice we have carried out by introducing wonderful brands like such as Estime, Mireica, Rilax, TruDtox, Novexpert, Marine Elements, Tricovel and Swissdent – all of which have helped so many people look good, feel good and enjoy life all the much more. Along the way, we’ve gained friendships which can really only happen when you place people above profits; by caring enough to share the very best.

Good public relations with the media, key opinion leaders, retailers and our customers play an important role in LiveLife’s marketing and promotion of brands under our management.

In fact, our excellent network of relationships at all levels of society and amongst industry players, coupled with our strategic and innovative PR campaigns are the key success factors to our products’ popularity and success in the market.

A Refreshing View of Business

Staying true to our own vision of success, we at LiveLife make it our core business to bring to you only the safest, clinically proven and most effective health & beauty innovations.

As a distributor and marketing arm of specially selected and evidence-based health & beauty solutions, LiveLife extends the greatest service to its clients and customers by carefully selecting only the “crème de la crème” of beauty or healthcare products from the multitude of beauty/health solutions available. This painstaking process may continue for some time before a true gem of a product is discovered; however it is a worthwhile process as it ensures our clients that all of the products we choose to distribute are of credible and trustworthy sources.

LiveLife’s strict selection criteria ensures that only products with unique ingredients, that are safe and of top-quality which can meet international scientific standards to support its various product claims, are selected.

This corporate philosophy is the driving force behind the explosive sales of our inaugural product, Swiss skincare supplement brand: Estime® – Internal Beauty System. Beginning early 2007 and after extensive search for unique and natural products, we have since introduced many more exciting health & beauty innovations such as Rilax Zzz®, TruDtox®, Mireica®, Novexpert®, Marine Elements, Tricovel® and Rinshu.

The Drivers Who Steer LiveLife’s Pathway to Success

Always on the lookout for the latest and most advanced scientific innovations to improve quality of life, is LiveLife’s President – Mr. Lim Siang Wee, MBA (AGSM), MEng., B.Eng.(Sheffield), and Chief Operating Officer –
Ms. Aileen Chan, B.Business (UTS, Sydney). The brand management team is spearheaded by Aileen; who has over 20 years’ of experience in beauty- and health-related products, and a successful track record of not only launching and growing new and innovative products, but also of re-shaping consumers’ perceptions about health & beauty.

The LiveLife International Group of companies currently operates in the Asia-Pacific region in the strategic markets of Malaysia, Singapore and Japan. At the same time, new markets are also being developed with operations expected to commence soon in China, Hong Kong, Vietnam, UK and USA.

In 2003, LiveLife launched Estime® – Internal Beauty System, an oral skin supplement from Switzerland, in both Singapore and Malaysia.

Just 9 months after its launch, Estime won the Best Skincare Supplement Award 2004 from Watson’s Personal Stores, an international chain pharmacy as the best- selling oral skincare supplement in its Malaysian stores. The Ambassador of Switzerland, H.E. Dr Peter Schweizer witnessed the presentation ceremony in recognition of Estime’s rapid success in the market, with only less than a year from its launch.

In 2005, Estime was recognized not only as the Best-of-the-Best Skin Supplement but also as Best Selling SKU (Health Category) in Sales by the same chain store. Then, once again with true staying power, 2006 marked Estime’s third year of reign as not only the best-selling skincare supplement but once again officially as the Best-of-the-Best Skin Supplement for the second time around!

Apart from top selling awards, Estime also garnered a Beauty Award in 2004 for Innovation and R&D by Harper’s Bazaar magazine, recognizing the product’s scientific breakthroughs and technology. Readers of Her World magazine also gave their thumbs up to Estime as the Top Well-Being Product of 2004.

In the scientific arena, Estime achieved peer recognition when scientific papers on Estime’s clinical studies were presented to scientists and doctors at two international scientific conferences, namely the 16th Regional Conference of Dermatology and the 3rd Asia-Pacific Anti-Ageing Conference 2004. More significantly, proof of Estime’s efficacy and safety has now been published in the prestigious Journal of Cosmetic Dermatology in December 2005.

LiveLife’s marketing approach and marketing strategies have successfully propelled Estime into a major brand; taking over as the market leader within 12 months of launch. As testament to this, in 2006, LiveLife was also recognized as the Best Local Health Supplier by its main distribution channel at the time, Watsons which is a major chain pharmacy in Malaysia and elsewhere.

Bought over by a major conglomerate in 2007, Estime ceased to be manufactured in Switzerland, and thus is no longer available for distribution.

Do you LiveLife to the fullest?

We’re always on the lookout for dynamic people with an enthusiasm for the health, beauty and wellness industry. We value great minds and enterprising spirits.

If you have a passion and flair for living life to the fullest, an independent go-getting spirit with a never-say-die attitude, and if you approach problems as challenges and are creative enough to make things happen instead of just waiting for them to happen, we’d like to hear from you and more importantly, we’d like you to share your ideas. Write in to: hrd@livelife.com.my 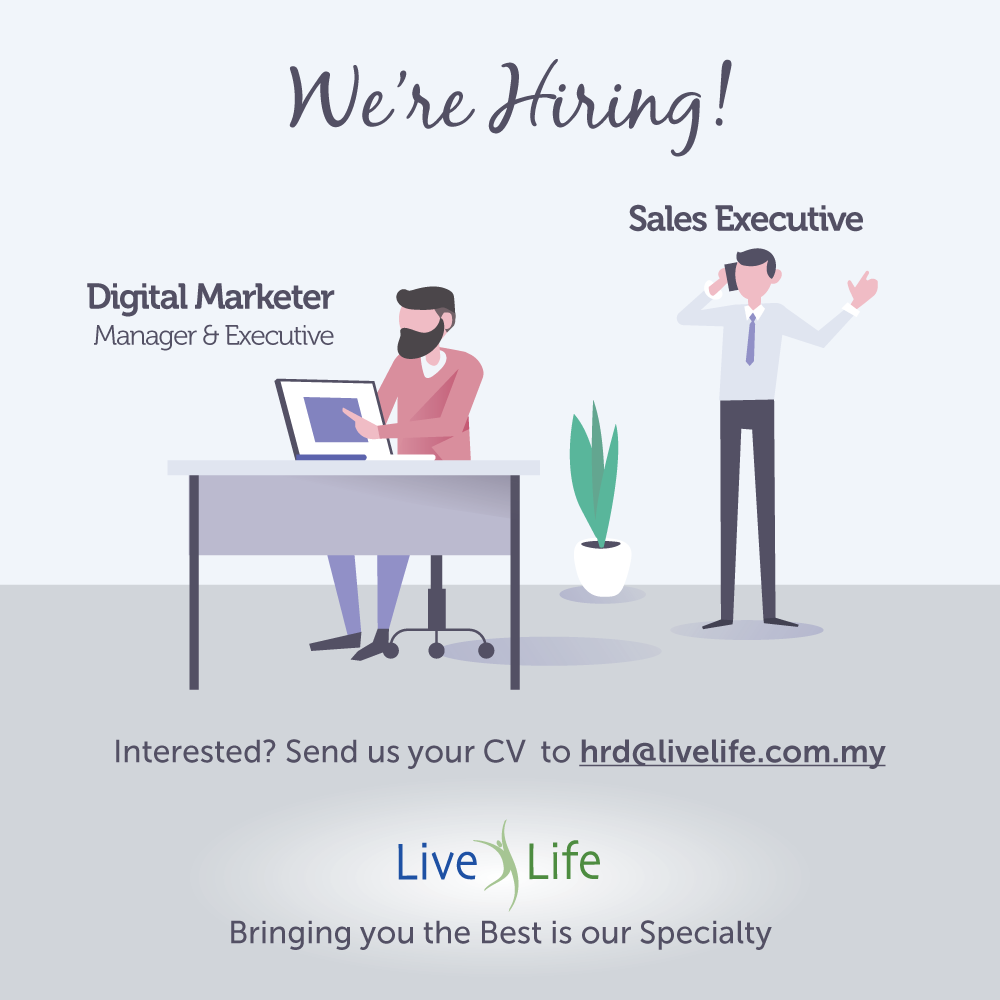